In my family it' s me, Francesco and my dad. We lost mom recently. Dad found out about mom's disease through my uncle. My mom at one point did the test and it was positive. When I turned 18, Dad told me all about it. Francesco, who is 2 years younger than me, also found out when he turned 18.

Since I discovered about the disease, our lives have changed. Mom kept getting worse and worse. She attempted suicide twice. I was only 19 years old. There came a time when she said, "my kids have seen too much already" and decided to go to an RSA. And from there a new phase began. We visited her every day, but for me mom, she was never sick as long as she was able to say my name. Mom was Mom. I only really realized it when she passed away.

However, since I was 18 years old, as soon as I found out about mom's disease, I decided to give my contribution to research. Even though I didn't feel like taking the test yet, I asked to be included in ENROLL. At first, I thought I was only participating to help research for Mom. I didn't yet experience it as something that could directly affect me. I did it just for her.

My thoughts about the test were always there, but the event that made me come to a final decision was a conversation with my cousin Anna who told me: "Maria, what are you waiting for, you are 25 now". I already had the thought hidden, that sentence convinced me definitely and so, I decided to do it. From that moment I started the path with Dr. Sabrina Maffi.

A series of video calls with Dr. Maffi and Professor Squitieri followed. The more time passed, the more I realized that I was ready. Immediately after having the blood draw, even before knowing the result, I immediately felt better, more relieved.  July 3, 2020 was the big day, the day I received my test result. I went to the appointment at Mendel along with my father and my cousin Anna. Looking back on that day, I think I only really realized it all that morning as we were driving to Rome.

I vividly remember the night before we received the test result. We all ate pizza together: me, Francesco and Dad. While we were at the table Dad asked me, "Maria, do you think we were brave or stupid in this life?". A little surprised I answered him: " Are you referring to tomorrow's test dad?". He said: "No, in general, I wonder if we were brave" - "Well, if we've come this far, I'd say we were brave. I can't back out now, Dad". He looked at me and said: "No Maria, you can back out whenever you want".

I remember that on July 3rd, I woke up with a bad stomach ache: at that very moment, I realized that from that day on, my life would change forever. I stood in front of the mirror and cried. I cried mostly because if I was positive, I wouldn't have been able to help my brother and my mom, who was still alive at the time.

The trip from Castellammare to Rome seemed endless.

Once we arrived, Dr. Maffi called me and my cousin Anna: "For you there is only good news, you are negative". I exclaimed: "Swear????".

I felt an immense joy. We started to cheer and celebrate, I was afraid he would kick us out of the room.

Since that day my life has changed. I got a tattoo with the number of the triplets and the date. 21 and 17 the triplets and 2020 the year. I also have a coffee cup on the back of my neck. For mom, because she was in love with coffee and I was born with a craving for coffee. It was our thing and I wanted it to be forever, somehow.

How has my life changed since that day?  I feel totally free, from everything.

I recommend doing the test so you don't have to live in doubt. I have always told people about the disease and the fact that I was at risk. Talking about it with others has always helped me, but I realize that not everyone is like that.

My brother also decided to get tested. I told him, " Whatever the test result is, even if you are positive, I will never look at you as a person who is ill. You will always and only be my brother, the blood of my blood. I will always be behind you. If you fall eight times, I will pick you up ten times."  We are super close since childhood. The loss of Mom has brought us even closer together.

Mom passed away on January 5, 2021. When I told her the test result she couldn't believe it. I hope it was a meaningful thing for her.

Her eyes become glazed over.

"It's part of me this thing, I have to cry sometimes, even often, to let it out. I hope I'm an example to all my cousins and my brother. I was the first of 11 nieces and nephews to get tested."

Regardless of my attitude, however, the decision to participate in ENROLL, even before I was tested, was very important to me. If we had only relied on the direct experience of my mom and my mom's uncles, we all would have approached the disease in a totally different way. We would have assumed, for example, that we were all positive. Mom has 5 siblings and they are all positive. They have all shown symptoms. If we had relied only on statistics, without knowing more about other aspects of the disease and the possibilities that come with research and treatment, we would have lived only in anxiety and fear.

ENROLL first of all made me aware of other experiences. I was able to understand that other possibilities exist and above all that even with the disease, one can live a worthy life. The counseling process was fundamental for me. As was, in general, the contact with LIRH that began long before I decided to take the test. Knowing the disease at 360° has allowed me to live everything with greater awareness. I was not alone in my world with my own ideas and beliefs. From my mom's experience I should have assumed that I would get sick soon too and have the same path as her. Instead I'm here, I'm negative and, to this day, my biggest regret is just not being able to introduce my grandchildren to mom.

The dialogue with others was essential, the moment I started talking I saw a world opening up.  I discovered that there are other universes. I'm not just saying this because I turned out to be negative. Before, for example, I was convinced that if I was positive, I would have to totally give up the possibility of having children. Knowing instead, made me realize that I could have done the prenatal test and choose to become a mother anyway.

Life is meant to be lived to the fullest, even if it means taking risks. You have to love your life, but also learn to take risks.  To my dad's question the night before the test, I finally answered it and now I feel free. I have chosen to be brave in this life.

I will continue to contribute to research by participating in ENROLL. I do it to help others, so that a cure can be found as soon as possible or, at least, so that Huntington's disease will no longer be scary. 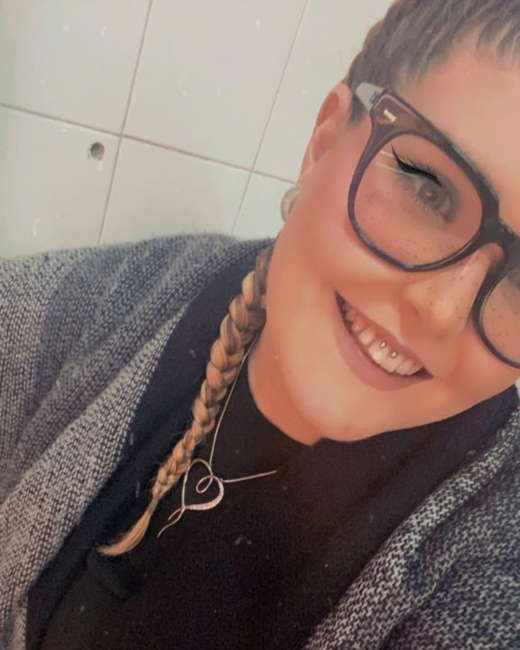