What is Huntington's Disease

Huntington's disease is a rare, hereditary, neurodegenerative disorder that mainly affects the Nervous System. The genetic cause has been known since 1993: it is a mutation induced by the expansion of a DNA tract in the HTT gene, which produces an abnormal protein (called huntingtin), which causes the death of nerve cells (neurons) in some areas of the brain.

According to the definition of the European Union, rare diseases are those having a prevalence of less than 5 cases per 10,000 people; it is estimated that there are about 15 million citizens in the European Union (27 members) who suffer or will suffer from a rare disease. Huntington's disease is specifically mentioned among those that affect people in adulthood (see European Commission - Directorate-General for Health and Consumer Protection: Directorate C - Public Health and Risk Assessment - C2 Health Information).

It is estimated that, out of the approximately 2 million Italians who are affected by a rare disease, about 6-7,000 are suffering from Huntington's disease and between 30 and 40,000 people are at risk of contracting this disorder. The disease is named after George Huntington, the American doctor who first described it in 1872, at the age of 22, summarizing the three fundamental characteristics: 1) the tendency to suicide and mental disorder; 2) inheritance; 3) its progressively disabling nature. The complexity of the disease is due to the fact that it acts simultaneously on several levels: involuntary movements (like an uncontrolled dance, which is why it is also called chorea, from the Greek "dance"), loss of cognitive capacities and psychiatric disorders. Therefore it manifests itself with different patterns varying from person to person, even within the same family: "The same cause, different faces of the disease". This makes it particularly difficult to recognize and treat it properly. To date, the disease can only be treated symptomatically. No cure has yet been found that would lead to recovery, slow down its progress or prevent its onset.

This video is a special report on Huntington's disease entitled "The most treatable among incurable diseases", by Telecolor - private broadcaster of Cremona - lasting about 45 minutes, in which the disease is explained from different points of view.

By watching the video you can understand in a more immediate and discursive way what Huntington's disease is, what it means to be affected by it or to live with an affected person. The disorder is analysed from different perspectives:

The genetic cause of Huntington's disease

In the first part of the HTT gene there is a sequence of three nucleotides, cytosine-adenine-guanine (CAG) repeated several times (eg. CAG-CAG-CAG-CAG-CAG- .... ). This is called "trinucleotide repetition".

Based on the genetic code, the CAG triplet encodes the amino acid glutamine. The repetition of the CAG sequence then gives rise to a chain of glutamines or "polyglutamines".

A trinucleotide repetition of up to 35 units of CAG sequences is considered normal. When, instead, the HD gene has more than 40 repetitions of the CAG triplets, the altered form of the huntingtin protein that is produced determines the disease at some point in life.

For this reason, the disease is caused by the repeated expansion of the CAG triplets and ranks among one of many polyglutamine-induced diseases.

A gene is represented by a DNA sequence (deoxyribonucleic acid) that encodes certain proteins. The DNA is a polymer (a long chain) composed of nucleotides with a double helix structure. A nucleotide is a chemical compound formed by nitrogenous bases (adenine, guanine, cytosine and thymine) linked to a sugar molecule (deoxyribose) and a phosphate group.

The DNA contains the genetic information that is translated into a protein-specific amino acid sequence, based on the "genetic code". Humans are diploids. This means that they have two pairs of each gene (called alleles), inherited from both parents. A human cell contains 23 pairs of chromosomes. Each pair consists of a paternal chromosome and a maternal chromosome.

The gene mutated into Huntington's disease is present in all cells of the body from conception, so the disease can be transmitted from one generation to the next. 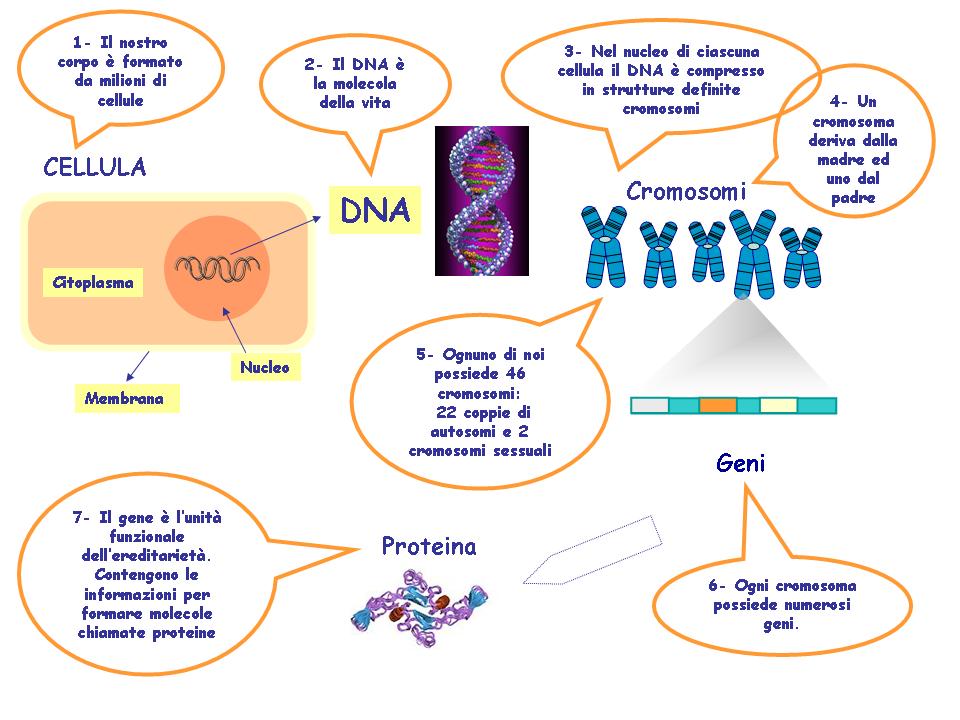 It is an autosomal genetic disease: it equally affects both men and women, since the pathological gene is located on a chromosome that is the same in both genders (autosomal and non-sex chromosomes).

Huntington's disease is a genetic dominant disease: by this we mean that it is sufficient to have a single copy of the pathological gene, derived from one of the two parents, to inherit the disease. In other words, the mutation in the HD gene has a dominant effect on the normal gene inherited from the unaffected parent.