My name is Jokha and I am 51 years old. I was 19 when I married my cousin Rashid. I married him against everyone's opinion.

"Don't marry him" - they told me - "strange things happen within his family from several generations, he will get sick aswell". I have always been aware of what I could go through, but I didn't want to leave Rashid alone, I was afraid that no one else would marry him, that he would be left alone, that nobody would take care of him.

After a year of marriage, we had our first daughter, Reab who, when she was only 9 years old,  started to have sudden epilepsy attacks, which in a short time became increasingly intense and close one to another. Furthermore, Reab often fell down and nobody knew why. It took a long time before receiving a diagnosis, her clinical situation was abnormal and new for the doctors in Oman. In 2000, a year after the first symptoms appeared, we took the girl to England and there we received an unexpected diagnosis: Huntington's disease. The news shocked us, nobody in our family had gotten sick so early. Could Huntington's disease affect a 9-year-old girl?

In 2000 Fatma, our second daughter, was born, but fate was cruel to her too. In Fatma, the disease manifested even earlier and in a more  violent manner. 2004 and 2005 have been terrible years for our family. In 2004 at the age of 14 Reab lost his life and after a year, in 2005, at the age of only 5 years, we also lost little Fatma. Getting back to life was very difficult, but life seemed to want to offer us another opportunity and a new hope with another son, Adnan, who had never shown any symptoms until the age of 14 and we hoped until the end that his future could be different from that of his sisters. Adnan was very thin, extremely neat, clean and reserved. On his 17th birthday, while he was in the mosque, he was hit by a very strong epilepsy attack. We were not with him, some people who were  there rescued him and accompanied him home. Within three years, we also lost Adnan. In the meantime, Rashid's health began to deteriorate quickly and relentlessly until, in 2011, when he passed away. That same year, 6 months before I lost Rashid, I gave birth to our last son Tarik. A cute, lively, talkative and intelligent child. But the disease did not spare him either, and he passed away  in 2019.

We met Jokha for the first time in Oman in 2013, when we were contacted by his brother for a request of help for his family. We met her a few days ago in Rome, in one of our clinics, where she came with her brother and two grandchildren to be visited by prof. Squitieri and his team. Prof Squitieri cured little Tarik in the last years of his life, as far as possible. The boy became sick when he was only 18 months.

During her 20-year long ordeal, Jokha told us that she had the great fortune of always having a dear friend close to her, who was very comforting for her.

We asked her, "What would you say to a person who learns today that Huntington's disease is present in their family?" "To cry and keep busy." - she replied - “When you feel the need to cry or scream you have to cry and scream, but then you have to get busy and keep busy, you must not give in to despair at all. Despair should not be repressed, but we must not let ourselves be overwhelmed by it ”.

Today, Jokha volunteers in his hometown Muscat hospital and she went back to work. 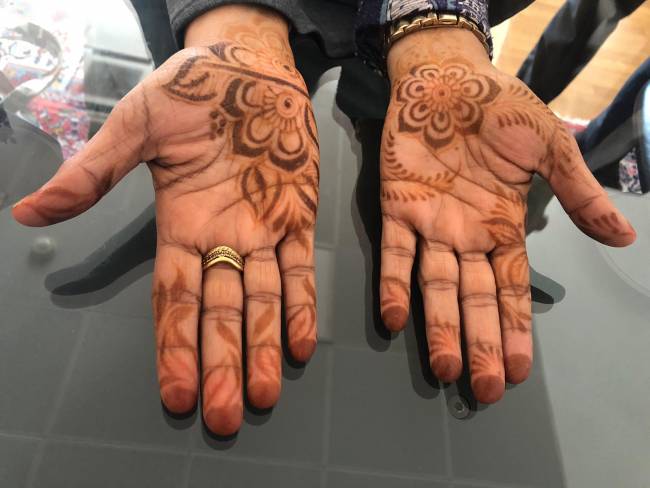