about the experimental drugs

SNPs are a common type of genetic variation that normally occur in all humans, but may also act as biological markers to aid in locating genes associated with a particular disease. Previous HD research has identified multiple SNPs that are associated with the disease-causing expanded cytosine-adenine-guanine (CAG) repeat, which is an abnormality present in all HD patients that results in the production of mutant huntingtin protein, and causes HD. Therefore, Wave is utilizing common SNPs to precisely target the underlying cause of the disease.

Information about the functioning of our cells is contained in the DNA. DNA must be transcribed into messenger RNA so that this information can then be translated by the ribosomes used to "make" proteins. The antisense drug is a small piece of DNA that recognizes and binds to messenger RNA, blocking its translation into protein. In people with the mutated huntingtin gene (mHTT), ASOs are designed to reduce the production of the messenger RNA that tells cells to produce mHTT.

SNPs, or single nucleotide polymorphisms, are a kind of 'genetic fingerprint' present in DNA and they help to recognize specific points of a gene and its mRNA. It is as if the SNPs represent a pin on a map (in this case the mHTT) that allows the drug to identify and target, reducing it, the defective protein instead of the healthy one.
SNP1 and SNP2 are possessed by 70% of the patients. 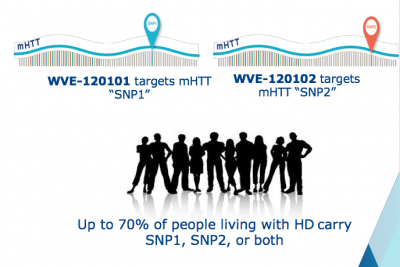 The ASOs are not able to reach the brain directly due to the existence of a sort of 'defense wall' that our body produces around the brain itself, which is called the 'blood brain barrier'. This means that in order to reach the brain they have to be infiltrated in some other way. Both WVE-120101 and WVE-120102 are administered Intrathecally in patients with Huntington's Disease.

Phase 1b / 2a will be completed successfully if ...

Whether the drugs are safe and well tolerated throughout the study and whether the levels of mHTT dosed in the CSF are effectively reduced. In this case, a subsequent phase III will be launched on a larger number of patients to assess the efficacy, or the clinical benefit, of the two molecules on patients.

To know the details of the two studies consult: